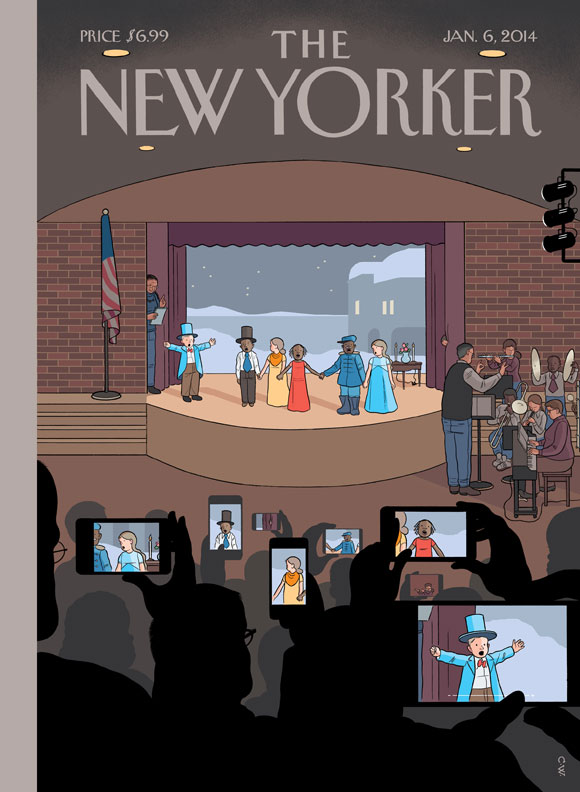 COVER STORY: “ALL TOGETHER NOW”

Though I’d had the image of parents photographing their kids at a school play in mind for a while, it was a line in Mary Zimmerman’s transcendently rejiggered “Jungle Book,” which my family and I attended this year, that prompted me to think it might make an O.K. cover. It’s not necessary to go into context, plot, or theme here, because the line (Zimmerman’s own) means exactly what it says: “Well, one’s own children are more important than the children of others.… Everyone knows that. The world runs on that.”

My daughter squealed and flapped her hands with pure, sincere glee throughout the production, and she wasn’t alone; some of the pleasure I’d taken in the performance up to that point was watching the children in the audience bobbing up and down in their seats, laughing and clapping—which made Ms. Zimmerman’s words all the more well-aimed (and, as we used to say in art school, site-specific). Predictably, her line zinged over the heads of the kids, but got a big laugh from the parents, hitting us all in the heart.

Steve Jobs, along with whatever else we’re crediting to him, should be granted the patent on converting the universal human gesture for trying to remember something from looking above one’s head to fumbling in one’s pants pocket. I’m pretty sure I read somewhere that most pre-industrial composers could creditably reproduce an entire symphony after hearing it only once, not because they were autistic but simply because they had to. We’ve all heard Bach’s Brandenburg Concertos hundreds of times more than Bach ever did, and where our ancestors might have had only one or two images by which to remember their consumptive forebears, we have hours of footage of ours circling the luxury-cruise midnight buffet tables.

Sometimes, I’ve noticed with horror that the memories I have of things like my daughter’s birthday parties or the trips we’ve taken together are actually memories of the photographs I took, not of the events themselves, and together, the two somehow become ever more worn and overwrought, like lines gone over too many times in a drawing. The more we give over of ourselves to these devices, the less of our own minds it appears we exercise, and worse, perhaps even concomitantly, the more we coddle and covet the devices themselves. The gestures necessary to operate our new touch-sensitive generation of technology are disturbingly similar to caresses.

This is the first cover of 2014. I drew the first of 2013 after chaperoning my daughter’s school class to a production of “The Nutcracker” and hearing about the Newtown shooting shortly after the school bus pulled into the parking lot. Like the other parents, I followed the story, listening to the radio and, hands shaking, scrolling through the news reports on my iPhone, all the while making sure my daughter heard about none of it. Now, a year out, it’s absolutely shameful that the certainty with which we all believed national gun-control legislation would be enacted has been met with nothing. Just this morning, I heard one of the Newtown families interviewed on the radio—they’d lost their only daughter that day—and they spoke of the foundation they’d established in her name, invoking the chilling phrase “so that no other parent would have to go through what they had.” And all they had left of her were their memories, and their pictures. 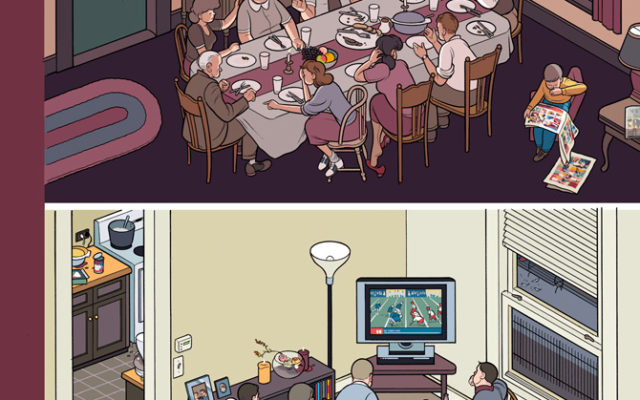 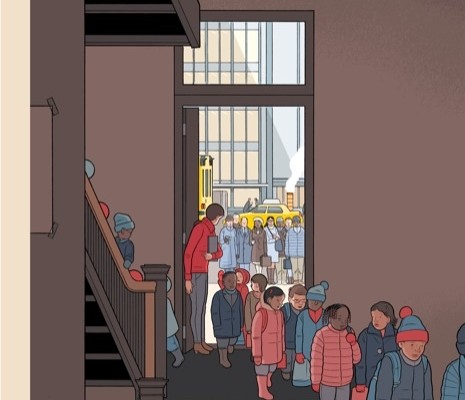