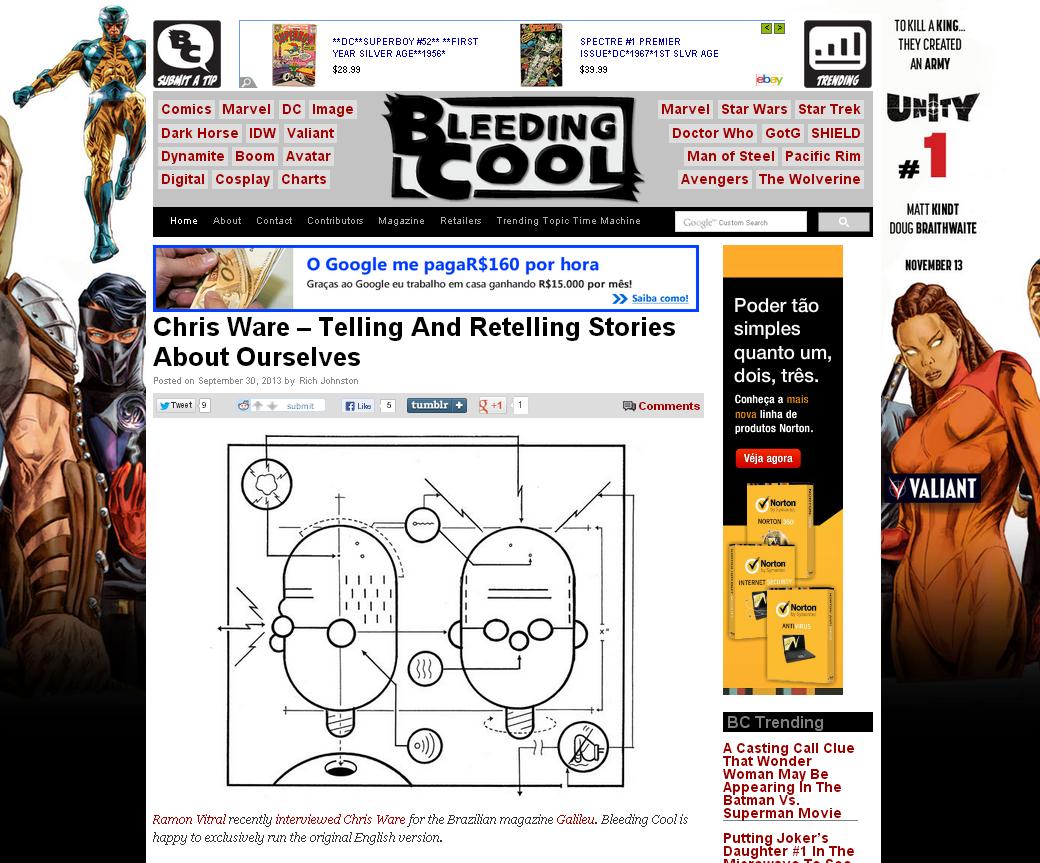 Chris Ware – Telling And Retelling Stories About Ourselves

Building Stories comprises 14 publications and you haven’t set a reading sequence. Based on analytic combinatorics, I’ve found that there are 87 billions, 178 million, 291 thousand and 200 different possibilities of reading it. Were you aware of these numbers while you developed Building Stories?

Well, no. I suppose I dimly realized that the number of possible reading orders was potentially mathematically impressive, but not that impressive. Are you making that up? I did want to create a book which had no beginning or end and hopefully vaguely mirrored the way one is able to enter one’s memories from all sides and at all times at once, to say nothing of put said memories together in countless variety of ways, even if the experiences they recount are more or less consistent and more or less unchanging (though there are built-in contradictions and misremembrances in the book which also hopefully reflect the errors and rewritings that we constantly inflict on ourselves.)

One can read a book or a comic, watch a movie or attend an exhibition on any desired way, even backwards. However, this reading sequence is often established by the author. By giving so much freedom to the reader, what is your intention?

I guess, see above. I regularly amazed at how easily I am able to lose myself in a memory of childhood, even to almost lose temporary touch with the present; at the same time, the false memories I created as a child about what I thought my life might be as an adult still live on within me; it seemed absolutely impossible to me as a kid that I’d ever grow up into a man or get married and have children, just as it seems increasingly impossible now that I was ever really a child. One of the reasons I think we feel compelled to tell and retell stories about ourselves is that our memories simply become less and less credible as we age; as they’re hopelessly embedded in language, they seem to dry up with time. It’s almost like we have to rehydrate them through the retelling.

In Understanding Comics, Scott McCloud says an accurate definition for comics would be “juxtaposed pictorial and other images in deliberate sequence”. You haven’t deliberated the sequences in Building Stories. Is it possible to say that your work raises doubts about McCloud’s definition? Or that Building Stories goes beyond the usual understanding of comics?

I went to art school so I suppose there’s always some voice in the back of my head prodding me to push beyond or to try and get at something that’s never been done before, but I don’t do so only for the sake of doing it; I do it to try and get at the real textures and structures of reality and memory as I’ve come to know them. I think the potential for comics to capture the ebb and flow of consciousness in both its linguistic and visual complexity is still pretty much untapped, especially since I think comics are by definition an art of memory, and I try with most of what I do to try to expand that a little bit, hopefully without alienating the reader in the process. (The utility of such an exercise is, of course, open to question.)

I genuinely want to make something interesting, compelling and respectful of the reader; there are so many other easily-swallowed media out there that I think we cartoonists have to try ever harder to compete, for lack of a more sporty word. It’s a sort of challenging though ultimately healthy situation, I think.

Where did the inspiration for Building Stories’ format come from? I’ve seen comparisons between your work and Marcel Duchamp’s La Boîte-en-valise. Was it a reference to you?

Yes it was, along with Joseph Cornell’s boxes, which, I believe also served as the inspiration for Duchamp’s “Boîte.” I think Joseph Cornell is one of the most important artists of the twentieth century and as time goes on he will ascend further and further in whatever art historical canon exists apart from collectors and investors (i.e. those who simply love art, not those who invest in it.) Also, H. C. Westermann’s sculptures were a huge inspiration; he’s a poet along the same lines as Joseph Cornell, but a very different one; more robust and thick.

How did your editors react when you presented Building Stories format? Was there any kind of apprehension, or any suggestions towards simplifying the work?

Not at all. Pantheon went out of its way to figure out how to produce the book exactly as I’d envisioned it (I’ll add here that it’s very important that it all be made from the same paper, despite all the different formats) and to make it affordable. I wanted it to be as close to art as possible while costing as little as possible. I also didn’t want anyone to feel bad about eventually throwing it away.

Do you know Randall Munroe’s website, Xkcd? On the Click and Drag strip, he allows the reader to choose the story’s course. It is even possible that the number of reading possibilities exceed those of Building Stories. Have you heard of this piece?

I have not, though it certainly looks interesting; thanks for letting me know about it. When I was a kid, there was a brief pre-internet fad for books called “Choose Your Own Adventure” — cheap paperbacks that told proto-videogame-like stories which presented various narrative forks and allowed the reader to choose which one to follow; I found them fascinating but ultimately confusing, as I’d spend most of my time thinking about how the writer figured out the story’s structure rather than getting lost in the story itself.

Again, the structure of “Building Stories” is such that the basic story and chronology are consistent and ultimately apprehend-able; the real experience, hopefully, is to become sensitive to the feelings of how one understands the story, whether as a book about a young woman’s early lonely years, or as that story remembered by her middle-aged maternal self, etc. I guess it’s not unlike how one gets to know someone; we piece together ideas of others from the stories and memories they offer us, but we never get the whole person. Ultimately, a sense of empathy is what I hope to open in the reader, both for the characters in the book itself and, beyond that, for real people. Empathy is the most important “skill” that one can learn in life, and one of the most difficult to maintain and to adjust. It’s why we have language and art.

In many works, you’ve included details that may be easily missed by readers. They’re extremely small panels, texts and illustrations which I’m not sure everyone will be able to note. Would you say that your work’s comprehension is only whole after all these details have been seen?

I dunno … there’s no way to control what one remembers or forgets about a book, though I think the best books are those which are so long and complicated that we end up forgetting the beginning before we’re even reached the end. What every person remembers or considers important has more to do with his or her own experiences of life more than it does with mine, I think (or at least I hope.)

Are you working on a new project? Is it as complex as Building Stories or is its reading more conventional?

I am working on another lengthy book, though it will be bound as per tradition. The story itself is just as, if not more, fragmented, however. And as far as comics meant for adults go, I don’t think they’re really conventional, at least not yet.

Taking into account the format and the excess of detail in Building Stories, the adaptation to other countries would be hard. Are you aware of any foreign country in which the work has been published (or at least, this is planned to happen)?

Yes, “Building Stories” is going to appear in a French edition in the next year to two years, or however long it takes to translate and letter. I don’t envy the people who are taking on this task, needless to say. 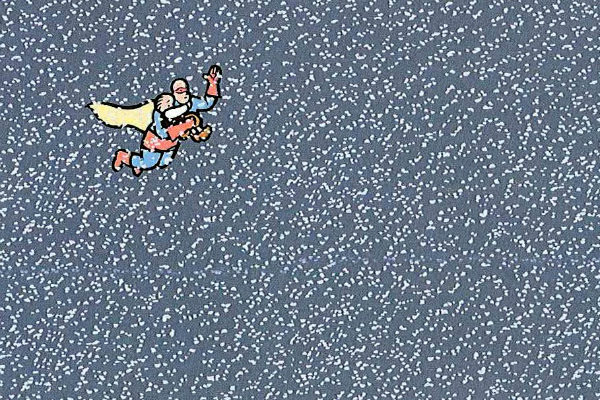 Are You My Mother? no Brasil